M.A.R.S. Annihilators are Destro’s elite airborne assault troops. They can be deployed by sea, air and land using the mini-turbine heli-packs on their backs, descending upon their target like armored locusts. Theese troops are recruited from the ranks of the Iron Grenadiers, where those with an affinity for three dimensional thinking are selected.

“We specialize in hostile takeovers!”

Check out HISSTANK.com’s photo shoot for the JoeCon 2015 M.A.R.S. Annihilators after the jump. 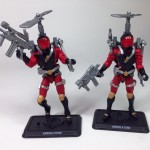