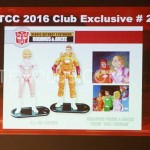 Both figures will be based off of G.I.Joe components (you can see that Arcee uses Bombstrike’s head) and will be available next year. Also shown alongside these new offerings were figures we were aware that were on their way – The Club exclusive G.I.Joe vs Transformers Old Snake with Stealth B.A.T. (Battle Android Trooper) x2 and Marissa Faireborn (Flint & Lady Jayes daughter) with Afterbreaker (Afterburner, a Technobot).

We’ve mirrored a few images here for your review, but make sure to check out the Transformers vs G.I.Joe Cross Over In Person Review and the Transformers Collectors Club Roundtable on our sister site TFW2005.co for more images and information.