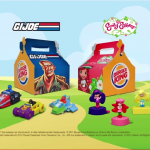 In a bit of…uh, what? news, a new promotional tie in for G.I.Joe is being introduced at Burger King Locations in Europe. So far, the countries confirmed to be offering the media tie in are Spain, Germany and Norway. Strawberry Shortcake offerings are also part of the promotion.

The toys include what appears to be a SHARC with pilot, a Jeep (AWE Striker?) with Driver and H.I.S.S. Tank with driver. The Kids Meal box has Duke on the side. Odd that G.I.Joe is seeing a marketing push in Europe while no sort of promotional tie in has been seen in North America for some time now. Check the video out here –