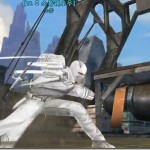 In video game news, SilconEra.com reports that Storm Shadow of G.I.Joe fame will be joining Cyphers, an online shooter from Nexon. From the source –

Cyphers, the online South Korean shooter from Nexon, is adding G.I.Joe’s Storm Shadow to the game as part of an official collaboration with Hasbro. This is interesting since Storm Shadow is played by Korean actor Byung Hun Lee in the recent G.I.Joe movie.

While the game is billed as a shooter, most people inside straddle both long-range and short-range weaponry with tendencies for one or the other.In Storm Shadow’s case, he tends to the close range, using leaping attacks, fast slashes and what appears to be an electric storm attack. From long range, he can also throw his shurikens.

Check out a clip of in-game action here –