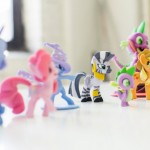 Hasbro just announced a partnership with Shapeways regarding a new initiative where Official and Fan Art will be 3D Printed and sold as official Hasbro products. The announcement first came from Hasbro’s 2014 2nd Quarter Financial Conference Call and Shapeways followed it with an official statement from their end. Though the initiative begins with My Little Pony: Friendship Is Magic, the company plans to expand into other Hasbro brands which [hopefully] might include G. I. Joe.

“Once we have filled our 3D printers with community designed ponies, we will continue to work with Hasbro and the Shapeways community to enable more Hasbro branded content to be created, 3D printed and sold.

This is a major step forward in realizing the creative potential of 3D printing, to make products on demand that might otherwise never make it into people’s hands. Hasbro has been incredibly forward thinking and open minded, to realize that the existing unmet demand within their fan base can be satisfied with the help of those very same fans. We expect to see many more partnerships like this, to enable user generated content to be 3D printed based on existing intellectual property, with fair attribution and compensation for all parties involved. We’ve seen this model work successfully in the digital realm, and we’re thrilled to be leading the charge in the physical.”

The designs (Fan Art) must be cleared with Hasbro to ensure they are not obscene, violent or hateful, but otherwise, the artists largely have free rein. Even the price for the figurines will be set by the artists.