Earlier this week, the Eagle Force Returns Facebook Page was updated with the final frames of #0 of the Eagle Force comic book! The entire issue is available for your reading entertainment here, but we’ve also mirrored the images after the jump here for your convenience.

Check out the comic then share your thoughts with us here after the break.

Via the Eagle Force Returns Facebook Page comes more pages from the upcoming Eagle Force returns Issue #0 comic book! In pages 2 and 3, we see a shadowy figure battling an adversary. Who is the masked man? What faction is his enemy fighting for? We’ll have to keep it locked on Eagle Force to find out!

The Kickstarter Campaign for this line is right around the corner, so we’ll make sure to keep you posted! In the meanwhile, join us after the break to check out the latest comic panels and to join in on the discussion already in progress! 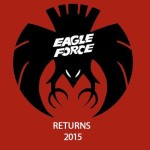 Sorry to the radio silence folks. Here is a quick update.

As you can see we’ve just started to roll out the Eagle Force comic. Issue #0 started yesterday and we’ll be posting a new “page” 3 times a week for the next month. If folks dig it maybe we’ll do more. Please post your feedback and let us know what you think.

As far as the figures, we are refactoring our roll out for the Kickstarter. We’ll have more updates as we get closer to the end of the year. We are working very hard behind the scenes to make sure the figures meet our expectations. We’ll be adding a new page to Eagle Force Issue #0 3 times a week for the next 3-4 weeks. If you like what you see let us know. We’d love to see the series continue past issue #0.

We’ll keep you posted as new updates are received. Make sure to check out the comic, then join us after the jump for discussion already in progress! 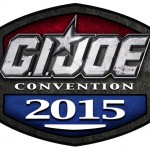 Here’s an index of all the articles that we shared during JoeCon 2015. There are some amazing galleries to be seen, so make sure to click through each day to see what was reported on from the International G.I.Joe Collectors Convention in Springfield, Illinois!

Well, Ladies & Gentlemen…it’s the saddest part of the weekend. The time where we wonder where the weekend went to so quickly, say goodbye to friends and begin to pack up as we prepare to head home. For those of us that were “Homefront Heroes”, we may not have to pack & travel, but the “awe, man” feeling sets in for us as well as we realize that JoeCon 2015 is coming to a close and it’ll be a whole year before JoeCon 2016 (in sunny Florida, right Joe Club? :D)

All that aside, what a great weekend it was! Hasbro was in attendance and showed us what we have in store for this year. They also filled us in on what’s on the horizon (kinda), so there’s a lot to look forward to! The G.I.Joe collectors Club hit quite a few home runs as well, with the announcement of the 2016 incentive figure alongside the Figure Subscription Service 4.0 lineup.

JoeCon 2015 also showed us that there are a lot of fantastic “boutique” style lines in our future from places like Boss Fight Studio, Zica Toys, Fresh Monkey Fiction and Marauder Inc., with their fantastic Vitruvian H.A.C.K.S., Eagle Force Returns and Marauder Task Force specialty figures.

Other news that was really neat to hear was word of the first Fan Voted G.I.Joe Character that will be selected from the rich assortment of characters available through the Kindle Worlds G.I.Joe Universe. This means that not only might we see a Shooter figure, but “home grown” characters from people like Bill Nedrow, Justin Bell, Jim Beard and Carrie Vaughn among others are a strong possibility!

Finally, in what was definitely the most noteworthy part of JoeCon 2015, we received confirmation from Hasbro that Mr. Gary “Goggles” Head, aka Gyre-Viper, will be immortalized in toy form as a character named “Sight line“. What a fitting name, seeing as how Gary always had his eyes on the scene, the prize and his friends/family’s back. This figure will go great alongside the fantastic tribute to Gary that the GIJCC included in this year’s Convention Exclusive Comic Book.

We hope that you’ve all enjoyed JoeCon 2015 regardless of where you may have experienced it from. If you were at the show, we wish you safe travels home and look forward to seeing you again next year! For those of you that stood home, thanks for spending the time with us here at HissTank.com! 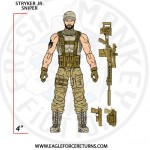 At the Boss Fight Studio booth at JoeCon 2015, there really was so much to feast your eyes on. For Eagle Force Returns fans, there were 3 new character mock ups on display! Now, to clarify, the Eagle Force Judo Fighter, Kayo was revealed prior to JoeCon, but is still considered a new reveal by many. Also revealed at the Show were

This line is really building momentum and I know that I speak for many when I say we can’t wait for this Kickstarter to, well, kickstart! Make sure to like the Eagle Force Returns Facebook Page. You can check out the mock up images and just us for Eagle Force Returns discussion after the break! 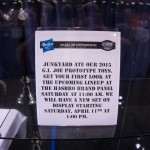 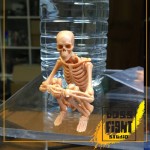 Now, when they say more pics, they aren’t kidding! Check out our attached assortment of images direct from the Boss Fight Studio table! On display are the upcoming Vitruvian H.A.C.K.S. figures! FYI, they’re FANTASTIC! Also included in the assortment are the upcoming Marauders Task Force figures set inside of an amazing diorama! Last but definitely not least, there’s Eagle Force Returns artwork and mock ups! Needless to say, the BFS table is KILLING IT with new eye candy on display!

Keep it locked right here on HissTank.com for continuing coverage throughout the weekend from JoeCon 2015! 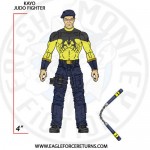 The Official Eagle Force Returns Facebook Page has been updated with a teaser image Kayo, the Eagle Force Judo Fighter! Accordingly to the post, Kayo is one of three reveals that will be available for your viewing pleasure at the Boss Fight Studio booth at the show.

Make sure to keep it locked on HissTank.com for live coverage from JoeCon 2015! 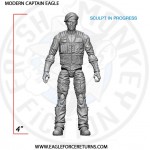 We wanted to share an early look at the “In Progress” sculpt for Captain Eagle brought to you by to the team at Boss Fight Studio, ZICA Toys and Fresh Monkey Fiction. We’re still working out the final details and accessories. The beret and vest will be removable.