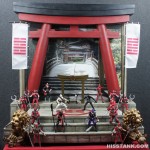 From within their temple in Japan, the Arashikage Clan has spawned some of the world’s most elite ninja warriors. Many famous techniques were developed and mastered over the centuries by the Arashikage. These techniques, through countless hours of repetition, have made the Arashikage ninja a very formidable and proficient human weapon. Over time, many masters have taken charge of developing these warriors and leading the Arashikage Clan. Eventually this duty befell the individual known as the HARD MASTER.

Years later, an assassin was sent by a young COBRA COMMANDER to the Arashikage Temple to assassinate the Young Master’s rival. Mistakenly, the assassin’s arrow landed in the Hard Master rather than the intended target. The clan mistakenly blamed Thomas for his uncle’s murder, which led to his defection from the clan. Thomas eventually joined the COBRA organization and adopted the moniker of STORM SHADDOW while his rival became known as SNAKE EYES and would later join the G.I. JOE team. These two warriors would continue their storied rivalry, which began many years ago on the grounds of the Arashikage Temple.