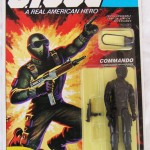 A short while back around Toy Fair 2014 HISS Tank.com reported on a press release that Hasbro and 3D Systems have signed a Co-Venture deal. No further details were given at that time, until this week. Very strong rumors have been surfacing surrounding this deal and it looks like Gentle Giant LTD will be producing Jumbo Sized ARAH G.I. Joe Figures in the near future. None of this information is official until Hasbro or Gentle Giant LTD – 3D Systems announce their official plans so the usual caveats apply.

We have attached a poll to this story so we can gauge interest in such a line. Out latest poll had a lot of talk about not having room for 6″ Black Series G.I. Joe or another size class for that matter. It turned out to be almost split down the middle. It should be fun to see if people will reverse their tone now that ARAH O-Ring 12″ Figures have the potential to enter the Arena of Sport!

Sound off and vote in our poll after the jump.