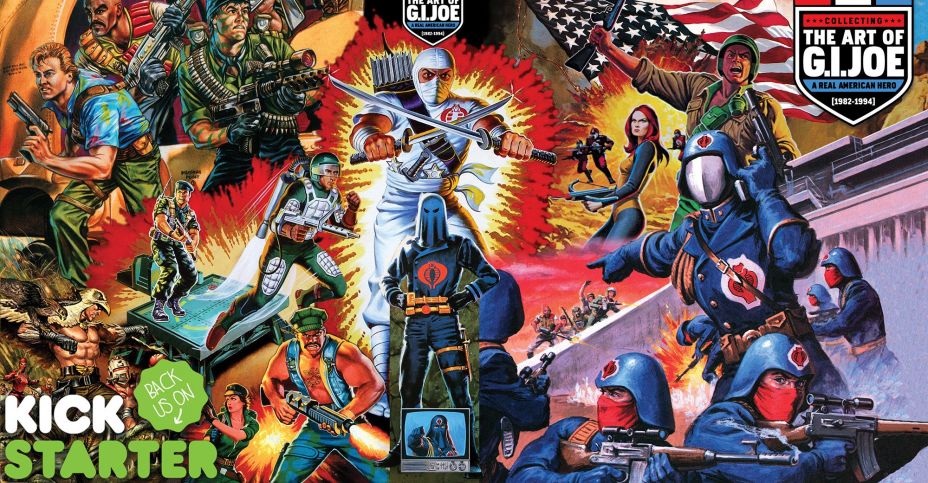 Yo Joe fans! This is Carson from 3DJoes.com. Nearly four years ago we completed the mission of Collecting the Art of G.I.Joe by collecting, documenting, restoring, and compiling every retail piece of painted art created for the G.I.Joe: A Real American Hero toy line, which spanned from 1982 to 1994.

This 460 page set covered everything from figures, vehicles, and playsets, to book and magazine covers, posters, and even obscure peripheral items like dinner trays, trash cans, and soap dispensers.

Thanks to the help of 420 Kickstarter backers just like you, we created 1,000 sets — and in less than two years, we sold out!

This book series helps fund 3DJoes.com, and we’ve been out of print for two years. We want this work to be accessible, but we wouldn’t be content just reprinting what we’ve already created.

To that end, and with your help, we are going to create a Collecting the Art of G.I.Joe Omnibus Hardcover edition that is bigger and better in every way. Here’s how:

Next: better! This hardcover won’t just be taller and wider, it will be packed with new and remastered content! The original set was 460 pages. The new omnibus hardcover will start at 480 pages, and we are going to stretch for 80 additional double gatefold spreads, bringing the total page count up to a mammoth 640 pages.

Check out this Kickstarter Event For Collecting the Art of G.I.Joe: Omnibus Hardcover Here

So where is all of the new content coming from? Over the last several years we’ve been on a mission to document the stories of the folks that created this timeless artwork. We’ve traveled to Rhode Island, Massachusetts, Queens, Manhattan, Connecticut, South Carolina, and more to interview folks like Kirk Bozigian (former G.I.Joe Brand Manager and Vice President of Boys Toys), Ron Rudat (former Hasbro designer and creator of the first six years of G.I.Joe figures), Mark Pennington (former Hasbro designer and creator of the next three years of G.I.Joe figures), Ed Morrill (former Partner of CLS&M, the packaging firm that created the packaging for G.I.Joe from 1969-1989), Doug Hart (former Hasbro artist responsible for the lions share of late 80s and early 90s G.I.Joe paintings!), and Bill Merklein (contract sculptor that crafted over 70 G.I.Joe figures from 1983-1989).

We conducted comprehensive interviews and solved some of the unsolved packaging mysteries that have puzzled collectors for decades:
such as, why was this artwork for Zartan shown on the 1984 catalog and cardbacks but was never released at retail? (Instead he was released with his vehicle, the Chameleon.) Why was this 1987 collage created, but not released until 1989 in a licensed calendar? Was the tiger force deco truly inspired by a Portuguese NATO jet? Who are these Wal-Mart executives, and why were they turned into honorary G.I.Joes? What happened to Doug Hart’s 1990 collage masterpiece? Why did it never see release in the US, but was released by Hasbro’s subsidiary Milton Bradley in Europe just a year later? What’s the story behind this amazing naval playset, with art by Mr. Hart? What really sank the 1995 Battle Corps Rangers, Manimals, Replicators and more?

Not only will these creators’ stories fill the pages of the new Omnibus Hardcover, you’ll be able to watch them on the included Blu-ray disk!

We filmed these interviews and plan to stretch to include them on a free Blu-ray disk inserted inside the back cover of the Collecting the Art of G.I.Joe Omnibus Hardcover.

Please, back this Kickstarter today and help preserve their work and their stories, for all of the world to see and appreciate. Yo Joe!