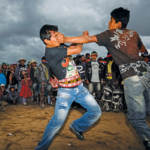 Fans should keep in mind to take this with a grain of salt since their other exclusive article for G. I. Joe 3, didn’t exactly panned out.

Nevertheless, let us take a look at what the rumor says:

“Paramount is hoping to capture a little more 80’s kid nostalgia with the film, which will be made working off a script from Evan Spiliotopoulos. Snake Eyes, which is eyeing a late-spring 2019 start of production, will focus on the origin story of the famed GI Joe warrior who finds the family and training he desperately needs amongst a clan of Japanese warriors who must simultaneously thwart a terrorist attack.”

Regarding the characters and the plot:

“It was recently reported that Ray Park, who played Snake Eyes in the two previous GI Joe films, would not be returning for the origin film as the studio is looking for a younger actor, preferably someone in their early twenties. When we meet this new, younger Snake Eyes, it’ll be as a street fighter in Peru. Driven by the desire to avenge the death of his father, Snake Eyes is apparently a man on the move until he ends up in Japan, where he and his best friend, Tommy, aka Storm Shadow, will begin their training with the Arashikage Clan. The film will see at least 3 of the clan’s legendary masters as they train Snake Eyes and Storm Shadow as Hard Master, Soft Master and Blind Master are all set to appear. Also present at the Arashikage compound is the film’s female lead, Akita. In comic continuity, Junko Akita was an apprentice and lover of Storm Shadow; here she is the head of security and will be a love interest for Snake Eyes.”

Cobra would also make an appearance in the form of a new character made just for the movie:

Additional production details include facts such as an all-Asian cast, and 9 main roles (leads and supporting).