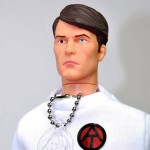 That’s right, it’s March 16th and today is the final day to join the Club. You will receive 9 issues of the magazine and will receive either Pythona or Mike Powers.

Mike Powers will feature a new head as well and a light up electronic eye! Also revealed is an image of the add on set or clothing and accessories to really make the Atomic Man pop!

Also of note is the opportunity to purchase the numerous Club exclusives including the newly announced Only Human Transformer shared exclusive set featuring Arcee and Rodimus Prime in human form. Note: Arcee will feature a new head sculpt, the Bombstrike head is only a mockup.

You will also be able to purchase their wonderful Figure Subscription Service 5.0 they will soon reveal!