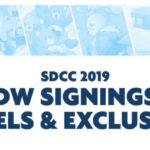 IDW held their SDCC 2019 panel and featured several G.I. Joe titles. The whole panel was 20 minutes long with just 5 minutes of content belonging to the G.I. Joe franchise. Nevertheless, there was a significant amount of info drop during the panel.

It is also worth noting that the Snake Eyes variant covers did not make it to the booth as exclusives, due to a production issue.

You can read a detailed description about each title, after the jump.