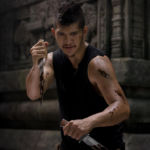 Martial artist and action star Iko Uwais is currently in discussions to join the cast of G.I. Joe: Snake Eyes as the Hard Master.

Since breaking out with the acclaimed Raid films, this Indonesian star has popped up in several high-profile Hollywood movies, Star Wars: The Force Awakens and Mark Wahlberg’s Mile 22 among them. He last appeared as the villain in this summer’s Stuber opposite Dave Bautista and Kumail Nanjiani.

You can check out Mr. Uwais in action via a video clip from The Raid 2: