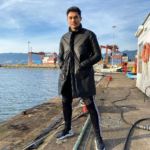 With just three days away from the principal photography of G.I. Joe: Snake Eyes, we have received a confirmation that the production has decided to place a working title for the movie.

Titled as ‘Grackle Bird‘, the working title refers to the production studio of the same name.

Working Titles are most commonly utilized to safeguard the filming locations of a movie from outside interference. This is especially true for movies with notable, famous names. However, masking of an actual title is impossible with this day and age; since it is easy to find out which working title refers to which movie and the information will soon be available on the Internet.

It is unclear why ‘Grackle Bird’ is used as a working title (and as the title of the temporarily set up production studio), but the bird, which is most commonly found in Canada, is black in color with a slightly purple tinted head when looked closely. Reminds you of anyone?

Filming is expected to start on October 15th and Henry Golding is currently chilling at the filming location (pun intended). The cast and crew will enjoy a long weekend prior to their busy schedules; as Monday (October 14th) is a holiday in Canada.