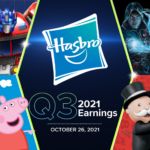 Hasbro held their 2021 Q3 Financial Call today, and as always, HISSTANK was present to cover the event.

The event took a somber tone due to the recent passing of Hasbro’s former CEO Mr. Brian Goldner.

To greet all of us, Mr. Richard Stoddart took the chair as the Interim CEO.

Some of the discussed topics (including Q&A):

You can read all the details for the above topics, after the jump.

Regarding the global supply outage, Hasbro CFO Deborah Thomas stated that Hasbro is ensuring that there won’t be a shortage of toys for the holiday season. She stated that they have taken additional measures such as air-freight to circumnavigate the shipping concerns. Despite the additional cost due to air-freight, she confirmed that there won’t be another price increase within 2021 to minimize the hit on retailers and consumers.

Richard Stoddart stated that in addition to air-freight, the following list of mitigation plans are in place:

Mr. Stoddart stated that Hasbro is in the process of nominating a permanent CEO for the global toy and entertainment giant.

“Before turning the call to Deb, I want to touch briefly on the plan for naming a permanent CEO. Our board is and always has been actively engaged in succession planning for the CEO and other senior executive roles. This work provides a strong foundation for the naming of a new long-term leader for Hasbro and is well underway. Until that time I am working closely with the outstanding group of talented individuals making up our senior management team.”