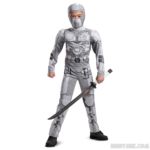 Disguise Costumes is revealing their 2021 lineup and with it, the postponed (originally scheduled to be out in 2020)  Snake Eyes: G.I. Joe Origins movie costumes targeting this year’s Halloween. We’ve previously heard about these, but this is the first time we get to see them in full glory.

You can check out images of all the above items, after the jump.