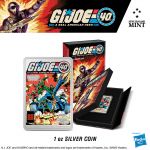 “Yo Joe! Celebrate the 40th anniversary of G.I. Joe: A Real American Hero with this action-packed memento!

Featuring the first cover of the comic book series in 1982, this rectangular 1oz pure silver coin shows the Joe team in full colour with the 40th-anniversary logo at the top. The design includes a mirrored border and a mix of light and heavy frosting on the text and speech bubbles. This is a piece that will certainly stand out in your collection! To confirm it as legal tender, the Ian Rank-Broadley effigy of Her Majesty Queen Elizabeth ll is engraved on the obverse.

This officially licensed coin arrives in a G.I. Joe-themed box, that includes the anniversary logo and an eye-catching image of Snake Eyes. Inside this specially designed box, the coin is held in an acrylic case, perfect for showcasing while keeping it protected from any forces. Printed on the back of the box is a Certificate of Authenticity and the coin’s unique number in the mintage of 1,982 – reflecting the year of the launch.

Join the Joes in defending the world against the controlling Cobra!”

You can purchase the silver coin via New Zealand Mint.