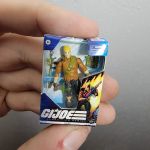 For those who do not know, Toy Mini Brands is a line of blind-bagged toys where the capsules contain miniaturized versions of popular toy lines.

So far, we’ve only discovered Duke from the Classified Series but other toys may pop up sooner or later.

Previously, we’ve seen the World’s Smallest line of G.I. Joe toys which included miniaturized ARAH figures such as Duke, Snake Eyes, and Roadblock. Unlike the World’s Smallest series, the Toy Mini Brands line will stick close to the actual contents of the original toy including the packaging. However, the blind-bag nature of the Toy Mini Brands line will make things harder to actually purchase the toys we want.